Ethiopian Government About The GERD Dam

Egypt, Sudan, and Ethiopia concurred late on Friday to frame a board of legitimate and specialized specialists from the three nations to finish an official concurrence on the principles of filling and working the disputable Grand Ethiopian Renaissance Dam (GERD) over the Nile River.

The understanding was reached during a video smaller than normal culmination of the Bureau of the Assembly of the African Union Heads of State and Government to examine the GERD, said Egyptian presidential representative Bassam Rady in an announcement.

It has been consented to shun taking any one-sided activities including filling the dam before agreeing, Rady stated, including a letter will be sent to the UN Security Council (UNSC) which will examine the dam issue on June 29.

During the virtual gathering, Sisi featured Egypt's perception to arrive at a reasonable and adjusted understanding "that empowers Ethiopia to accomplish the financial advancement it tries to ... by considering the interests of the downstream nations, Egypt and Sudan, without hurting their water shares."

The accomplishment of this procedure requires the responsibility of all gatherings not to take any one-sided measures, the Egyptian president noted.

On June 20, Egypt presented a solicitation to the UNSC over the GERD, approaching the UN body to intercede "to stress the significance for Egypt, Ethiopia, and Sudan to proceed with dealings with altruism."

Since June 9, the three nations have been holding normal video gatherings to talk about issues identified with the filling and activity of the GERD within the sight of three eyewitnesses from the United States, the EU Commission, and South Africa.

In the course of recent years, tripartite chats on the principles of filling and working the Ethiopian stupendous hydropower dam, including those facilitated by Washington, have been pointless.

Ethiopia as of late said it would before long beginning filling the store, regardless of Egypt's rehashed alerts against any one-sided activity without a tripartite understanding.

Ethiopian Government About The GERD Dam 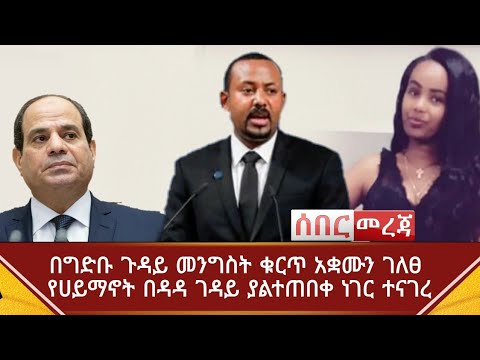 Egypt, Sudan, and Ethiopia concurred late on Friday to frame a board of legitimate and specialized specialists from the three nations to finish an off...